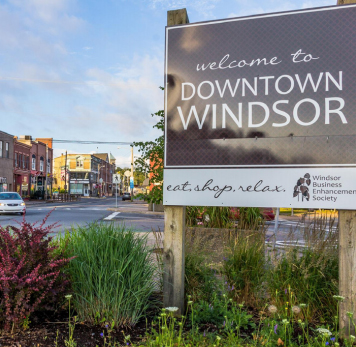 Windsor, Nova Scotia is a town located in Hants County. It is a service centre for the western part of the county and is situated on Highway 101. Although not truly in the Annapolis Valley, Windsor is the gateway to the Valley and many do consider it to be a part. Windsor’s location,many attractions, rich history and active recreation department enables it to live up to its claim of being a great place to call home. Being a short drive to Halifax allows many of its residences to live in the more rural setting, but commute and work in the city.

Windsor’s first European settlers were the French who came to the region near 1685. The town was officially incorporated in 1878. One of Windsor’s most historical attractions is the blockhouse, remaining from Fort Edward. The Fort was used as a prison and major post during the expulsion of the Acadians.

For hockey fans Windsor is a special place. Around 1800 the game,which is now Canada’s favourite winter sport, was first played by students at King’s College. Windsor Hockey Heritage Society now operates the Birthplace of Hockey Museum to celebrate and preserve this important part of Canadian History.

Each year in October Windsor hosts the Pumpkin Regatta to celebrate the world famous Howard Dill Atlantic Giant Pumpkins.These pumpkins are the largest variety in the World. As of 2008 the record weight for these pumpkins was 1689 pounds.

Hants County Exhibition Grounds is the home of North America’s oldest Agricultural Fair, established in 1765. With more than 4 acres undercover in sprinkled buildings, visitors can watch the various events in the Horse Show Arena and stroll through the Exhibit and 4H Buildings. An excellent location for meetings and conventions.

There are many other fun and interesting things to do in Windsor for visitors and residences, no matter what the season.

Many great ways to spend some time outdoors in Windsor. Check out one of the many hiking trails, go canoeing or kayaking, try horseback riding, or enjoy some cross-country or downhill skiing at nearby Ski Martock.